I’m not one of those people who has an extensive library of DVD’s. I feel like I’m in the minority, based on the massive DVD collections I’ve seen from friends on Facebook, friends in real life, and even former clients from my days as a social worker.

My reasoning is that I believe there are better things (and experiences) to spend my money on. And seriously, if I’ve seen the movie already, I know how it ends. Why would I spend my precious time  watching something that will not surprise me in the least? And why would I spend $24.99 on a new DVD that I haven’t seen and may or may not even like? Seems like a silly waste of resources to me.

However, that is not to say I don’t have a DVD collection. I do.  It’s just a bit on the small side. 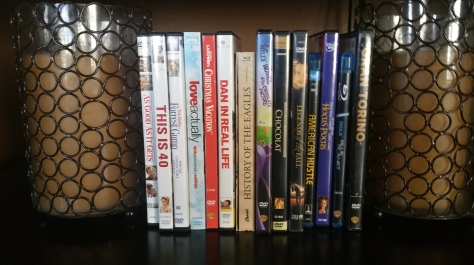 My DVD collection used to be approximately 3 times this size, but we sold most of them at the garage sale we held prior to moving to Colorado. The only DVD’s that were actually difficult for me to let go of for a pittance of $3 was 2 seasons of Arrested Development. Funniest show ever, IMHO. I could re-watch episodes over again and laugh just as hard each time. Kinda like Seinfeld, Parks and Recreation, and 30 Rock, for me anyway.

You see, I have requirements for buying DVD’s. I will not pay $24.99 or even $14.99 for that matter for a new DVD. I will pay $5 at Target for one I always meant to watch but never got around to. I will pay up to $10 for a DVD that I absolutely, truly loved with my whole heart because I am certain I will watch it again.

The following is a justification/review of my meager DVD collection:

As Good as it Gets: I think this is such a special movie.  Jack Nicholson is at his best, playing a cantankerous man afflicted with a severe case of OCD who despite everything, Helen Hunt’s character falls in love with. And Greg Kinnear. What an under-appreciated actor he is. I feel such affection for his character and the scene where he is beaten up by a group of punks broke me. And there’s that dog, a brussels griffon. This is the breed that won best in show at the Westminster dog show on Thanksgiving this year.

This is 40: Purchased this fall at Target for $5 (an example of one I had been meaning to see since it came out in the theaters several years ago). After finally seeing it, I can safely say I would have paid $14.99 for it in a heartbeat. It featured the great comedy duo of Leslie Mann and Paul Rudd in very often almost too close for comfort relatable married couple scenes. I loved it so much I tweeted at Judd Apatow.  Much to my chagrin, I got no response.

Forrest Gump: Need I say anything here? I think any right minded American DVD collector worth their salt owns this one, right? Absolutely charming, classic, and thought-provoking.

Love, Actually: This is an especially charming, feel-good Christmas-themed movie which I absolutely adore. And it features some of my favorite British actors speaking in their lovely British accents: Hugh Grant, Emma Thompson, and Keira Knightly. It’s a great, heartfelt mix of romance and comedy. Must watch it again soon.

Christmas Vacation: This is Hubs and my favorite Christmas movie. We know all the lines, to the point where we find ourselves quoting from this movie year round. For instance, when I suggest to Hubs that we could adopt a cat, I hear “Well then we’ll have a cat running around the house”. Or when I am utterly shocked at something I just heard, I might say “I wouldn’t be more surprised if I woke up with my head sewn to the carpet”. Or if he can’t hear something I just said, I will channel Uncle Leo by emphatically mouthing “they want you to say the blessing”. One of these Christmases, we’re going to host a “Christmas Vacation” themed holiday party, with guests costumed as characters from the movie. I think, however, that Hubs and I should not do the obvious thing.

It’d be more fun to go as these two, in my opinion.

Dan in Real Life: I think this is one of those movies I purchased impulsively from a clearance rack at Target or something. It was worth whatever it costed. It features Steve Carrell as a widowed father of three cheeky daughters who finds love during his family’s annual holiday gathering. It is heartfelt, funny, and charming. And the scene where the whole family is playing charades spend makes me wish I could have been there, perhaps as a long lost cousin or niece.

History of the Eagles: Hubs gave me this for one of my 40 something birthdays. I have always been a huge fan of the Eagles and appreciate seeing footage of them playing live and the behind the scenes stories from when they started playing together. Did you know that they lived in the same apartment building as Jackson Browne (who also wrote Take it Easy, which they later recorded)? Well, now you do.

Willy Wonka and the Chocolate Factory: This is a movie I bought on impulse this fall, with the plan in my head that I would include it in a special Halloween box of treats and whatnots for our 3 year old grandson. I remember enjoying this movie as a kid, but hadn’t seen it since. When I came home and showed Hubs, he commented that this might not be age appropriate for little guy. Then I remembered the scene with the little girl who blew up chewing bubble gum and realized he was probably correct. So I think I’ll hang onto this one for a few more years.

Chocolat: This is the most romantic movie ever! Hubs and I first watched it on a very cold, snowy Wisconsin night several winters ago and we were enthralled. It features a very handsome and charming Johnny Depp. Be sure to have good quality chocolate on hand when you watch it, because I guarantee your chocolate cravings will be activated.

Legends of the Fall: Brad Pitt is looking his very finest in this flick. It’s a beautiful, romantic story about three brothers and one very sought after and beloved woman. I haven’t seen it in years, despite owning it forever, so I need to make time to watch it again soon!

American Hustle: Hubs and I first saw this one in the theater, a rare occurrence for the two of us. It features a great story line and memorable characters with a sweet 70’s soundtrack. I appreciate the detail put into the set designs in every scene as it brings one back in time. And Jennifer Lawrence is an absolute hoot!  I love it so much I’ve seen it twice since I bought it!

Hocus Pocus: This movie seemed to re-surface this fall, whether it be people commenting about it on Facebook or the t-shirts being sold online with quotes from it. I hadn’t seen it in years, but thought it’d be a fun one to watch this Halloween season. And for $5 it was totally worth it. After seeing it again right before Halloween, I realized it is the classic movie to watch every Halloween, just like Christmas Vacation is the one for us to watch every Christmas season.

Blue Planet: I bought this one for Hubs when we bought our first and only blue ray/dvd player. He is a scientist after all so he has an especially keen interest in the topic of climate change. It is quite an amazingly beautiful film.

Grand Torino:  This is a deeply thought provoking movie. Clint Eastwood’s character was so memorable, and it was amazing to see his character’s development from start to finish. This movie blew my mind and made me cry at the end.

So, fellow movie lovers, what’s in your DVD collection?

2 thoughts on “About my DVD collection”