I will be turning 51 later this month. I’ve been hemming and hawing about how to mark the occasion. Growing up, my dad’s approach to his birthday every year was a shrug and him saying “Ah, it’s just another day”. Hubs has a similar approach. Neither want to be fussed over. They are humble men.

While I believe it’s admirable to be humble, I feel a weird sense of possibly displaced disappointment when people I care about don’t wish to garner attention on the anniversary of their births. Because I want to lavish them with attention and I want others to lavish attention on them, because dammit, they deserve it!  Your birthday only comes around once a year, right? I think no matter who you are, it’s worth celebrating making it through another year on this planet.

I’ve always had conflicting feelings as my birthday approaches each year. Without a doubt, I always want to celebrate the occasion, as I am a “good time Charlie” who is always up for a party.  Yet, calling attention to myself by reminding others of my impending birthday feels kind of yucky to me (hence the reason I’m not divulging the actual date of my birthday here).  I worry that people will think I am self-absorbed, attention-seeking, and conceited. That maybe they won’t give a rat’s ass but will feel nonetheless obligated to send me a card or wish me a Happy Birthday because I made sure that they were aware it was coming up.

I am not going to throw myself a birthday party. That would be obnoxious. On the other hand, I would also never in a million years discourage a loved one from throwing me a party on my birthday.

I appreciated the strategy some of my former social work colleagues employed on their birthdays: they baked treats and put them in the break room, making sure to send an email to invite everyone in the office to come and enjoy a treat to celebrate their birthdays. I’ve only been in my job for two months now, meaning I’m still under that 90 day ‘probationary period’ so perhaps I should tread carefully and focus on doing the best job I can instead of calling attention to myself just because it’s my birthday and I just so happen to be at work that day. Plus, my boss recently had her 31st birthday (yes, it feels weird that my boss is actually young enough to be my kid), and no fuss whatsoever was made by her or our co-workers that day because she’s humble like my Dad and Hubs. Yes, I work for a humble millennial. They do exist, people!

However, I very much enjoy baking and I am striving to be as kind as humanly possibly every day (see my last post about my new fangled Kindness Jar ), so maybe I should bake something and bring it in to work. It’s not like I’m going to waltz into the office that morning wearing a tiara and a “birthday girl” sash, right? 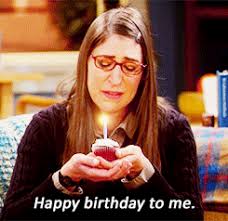