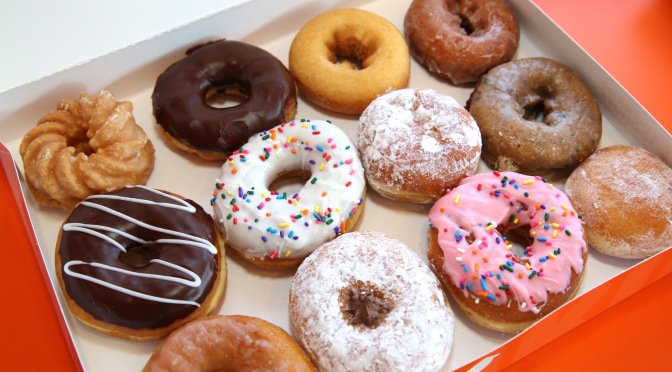 Donuts are no doubt right up there with hot dogs as the worst thing one can consume. Yet they remain a delectable delight in spite of our best efforts to maintain a healthy diet. My favorites are puffy, sticky glazed ones. With a hot cup of Joe they are especially scrumptious. I also enjoy me a blueberry cake donut (which is totally fine because blueberries are one of those healthy superfoods right?) covered in a bit of sugary icing. And I find chocolate bismarcks with creamy vanilla pudding tucked inside a most decadent treat.

A trip to the county or state Fair is not truly complete without digging into one of those little white bags filled to capacity with those deep fried nuggets of goodness sprinkled generously with sugar and cinnamon, am I right?

As a kid growing up in northern Minnesota, back when the danger of carbs was not basic knowledge, and I operated under the assumption that I would forever be slender and fit (aka innocence is bliss), I frequently would pop into the bakery next door to my parent’s clothing store after school.  Often I would purchase a long John with maple flavored icing which I’d wash down with a cold Coke. Good times.

Nowadays, I adhere to a new rule regarding the donut. I refuse to pay for them. Think about it this way: why would I pay (Hub’s) hard earned money for something that will be akin to poison for my body? Plus, think about all the scenarios in which free donuts are ‘a plenty: Community time after church, volunteer gigs, the break room at the office (granted, this is currently not a scenario I am a part of at this time, but surely have been in the past).  There’s a level of giddy excitement when treats like donuts are free for the taking, kind of like what I would imagine one would feel upon learning they had won the lottery. 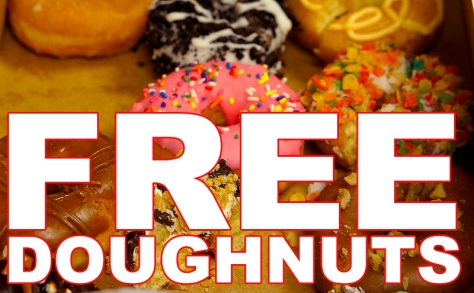 So there’s this donut shop located in a sort of run down strip mall near us. It’s housed next to a pot dispensary and a liquor store we sometimes frequent. And it appears to never be open for business. It’s called Holy Donuts and sports large pictures of donuts in the windows with what appears to be either orange construction paper or perhaps curtains beneath them. Not sure what that’s about. I surmised several possibilities about the owners of this donut shop, ranging from this being a cover for a super secret spy ring, to it being run by a lonely old man whose kids are all grown and living out of state and  doesn’t have enough help to run the shop so he is only able to make so many donuts, hence the reason it is apparently closed 88% of the time.

However, I did me a little research (aka googled Holy Donuts). Turns out they are a “mom and pop” shop, so that blows my theory of this being run by a lonely old man using the last bit of energy he has slaving away in the kitchen making donuts by himself. And they only serve fresh donuts, no day old crud going on in this joint. And the coffee they serve is fresh roasted locally. And to top it off, their website states that they are “humble and privileged to serve a lovely community of folks”.

There is an exception to every rule, right?