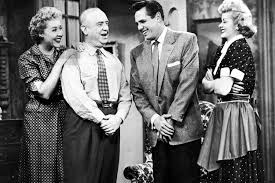 Lucy and Ricky and Fred and Ethel. These two couples were the best of friends. Growing up in northern Minnesota, my parents had their own Fred and Ethel. This couple featured heavily in my childhood. In fact, they were my godparents. They were as close to blood relation to us as they could be. We frequently shared meals, many of them impromptu, together. They and my parents had such a closeness, that it was not unusual for them (or my parents) to “pop in” for visits w/no prior notification. And no matter what was going on they always welcomed each other.

I think as we go through life as couples, the friendships we develop with other couples can be priceless. These friendships can help us to avoid getting stuck in a boring rut of relying on only each other for entertainment and friendship. They can help us to appreciate each other more, as one half of the other couple may have an annoying habit or two.  Like “She” is a loud chewer. Or “He” always shares obscure jokes that always go over my head. In my experience, these special friendships can provide hilarious memories to recall together as the years pass.

Hubs and I had a good thing going on back in Wisconsin. We enjoyed an active social life and had numerous memorable times with our couple friends. Gratefully, we are just now beginning to develop some new couple friendships here in Colorado.

Because I miss them all so much and want to pay homage to them, and because it’s Valentine’s Day and I don’t want to do the normal thing and gush on about romantic love on my blog, I’m going to tell you all a little bit about some of our beloved couple friends from back home in Wisconsin and Minnesota.

Couple #1: They are younger than us by about 10 years, and share our interests in cooking good food and drinking craft beer and good quality wine. One time, we invited them along with their two youngins over for supper. While I was busy in the kitchen chopping up onions for the salad and they were hanging in the three season porch with Hubs, I accidentally sliced the tip of my finger about halfway off. Of course, blood was gushing everywhere and I freaked out. Hubs drove me to the ER, while our friends stayed behind. We anticipated that they would end up going home, heck we even gave them permission, but they surprised us and were still at our house almost 2 hours later, after having finished making the entire meal.

Couple #2: They are a childless couple who are around 10 years older than us. They are faithful Christians and are the only people we always pray with before eating whatever gourmet food she has cooked for us. He makes his own never-fails-to-be-delicious wine and craft beer, which he shares generously. He is also a master gardener who once shared magnolia shoots with us, which later grew to be a beautiful tree in the front yard of the first home we lived in in Wisconsin.

Couple #3: This couple is the closest we have to our own Fred and Ethel. Trouble is, throughout the years we have rarely lived less than an hour from each other. Of course, that means the time we spend together, while infrequent, is especially precious. The night I first met Hubs I was with her. The night she met her husband I was with her as well. We were in each other’s weddings. We have gone on camping adventures together, back when we were all still young and newly married. We also, years later, enjoyed a camping weekend with all of our kiddos (we both had two, just many years apart). They are the friends we include in biological family gatherings. Their daughters were in our oldest daughter’s wedding. They came and helped us clean out our apartment when we had toddlers and were moving several hours away. These two are the friends of a lifetime.

Couple #4: He was Hubs first roommate in college. She was a “townie” in the college town we lived and studied in for 4 + years. We have had shenanigans galore with these two. Like the two New Year’s Eve’s in a row when the four of us were out celebrating and won big on pull tabs.  “She” almost knocked Hubs over, jumping into his arms with glee after the first win.

Fortunately for Hubs and I, we have even more of these couple friendships in our lives. And we treasure each and every one of them.

Do you and your spouse/significant other have your own Fred and Ethel? I would so love to hear about them!