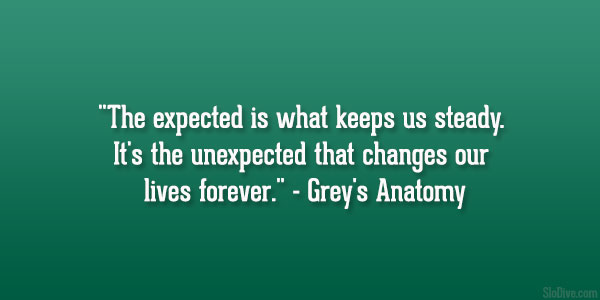 Don’t you think that with age many of us handle the unexpected circumstances in our lives better? I think it’s a result of having more time here on earth than others. We’ve simply had a larger number of unexpected things occur in our lives. We’re wiser.

And I think that is awesome.

Not that when a curve ball presents itself we don’t freak out a little. We’re still human after all.

It’s just that we’ve got experiences behind us that tells us we’ve gotten through some shit. We’ve survived. Heck, sometimes we have even thrived after the unexpected invades our realities.

I had two unexpected pregnancies. In the span of two years. I feel like an idiot when I tell people this, but it’s true. And I wouldn’t change a thing about how it all played out.

I was on the pill when I got pregnant both times. First pregnancy was a pleasant surprise. Sure, we (as my mom would say), didn’t have a pot to piss in; but we were newlyweds in love. We made enough money between the two of us to pay our rent and buy groceries and we had the love and emotional support of both sets of parents.

Then, after living in Texas with our baby girl Amanda while Hubs took graduate courses in meteorology and did some student teaching for a few months, I missed my period. Scared out of my mind, I took a pregnancy test and sure enough, it was positive. As Clark Griswold would say, I was more shocked than if I woke up with my head sewn to the carpet.

Decisions had to be made. Staying in Texas would have meant that Hubs would have finished his Masters and put himself in a position to work at his (then) dream job: Professor of Meteorology at a major university. With people, the guy has the patience of Job, so I was confident he would rock that career path. The flip side, however, is that I would have to apply for Medicaid (we were poor, young,and dumb and had no health insurance at the time) for myself and baby Amanda. Then we’d be there in Texas, knowing only a small handful of people (and not very well), raising two babies under 2.

The decision we made was to move back to Minnesota. Where we’d have the support of two loving sets of grandparents to cope with this unexpected turn of events. The guilt I felt (in hindsight, this was wasted energy as it does take two to create new life) for “making” Hubs quit grad school to move back to Minnesota and find employment in his field lasted for years.

While the three of us bunked with his folks and his teenage sister in (thankfully) a 3 bedroom apartment for a month or so, Hubs managed to get a job with a private weather forecasting company and we found ourselves a nice two bedroom apartment.

After Rabbie made their arrival during that hot as hell summer, Hubs got connected with a supervisor in the National Weather Service who hired him as an “intern” (a position that no longer exists) making $18,000 per year. This was sooo exciting! At the time. $18,000 to us in the early 90’s felt like a pretty good darn chunk of change. Only thing was, we had to move to International Falls, Minnesota. The “Icebox of the Nation”. Another unwelcome and unexpected thing.

Nevertheless, we made the best of it. Struggled, stressed out, but we pressed on as a team. As a family.

And now, here we are, married for over 30 years with two great kids in their 20’s and a smart as heck 6 year old grandson. Living in Colorado and as ready as we can be for whatever unexpected thing comes next.

What unexpected circumstances have happened in the course of your lives that changed everything? Please share in the comments.

9 thoughts on “Alphabet Soup Challenge: U is for Unexpected”