My “Kindness Jar”, which I wrote about here, ended up being a bust in 2018. Don’t ask me why. It’s not because I stopped noticing the kindness of others around me, or because I did nothing kind for anyone at all this past year. I guess I just lost interest in documenting all the kindnesses. It started to feel like I was just repeating what I had done the previous year with my “Happiness Jar” (same jar).

So in mid 2018, I just stopped doing it. And truthfully, I hadn’t given my old jar much thought since then.

However, on New Year’s Eve, as Hubs and I were sprawled out on the couch binge-watching Netflix (OMG-you must watch Black Mirror), feeling a little buzzed on craft beer, we began talking about what could be lying ahead for us in 2019. Hubs declared that the word for 2019, the word that would be mantra for the year as we plunge into our 29th year of marriage would be this: Adventure.

Now, that got me excited. So excited that I was prompted to come up with a new use for my old jar. In 2019, it’s going to be referred to as the “Adventure Jar”.

This is not to say that we are going to write down an adventure we had each and every day. That would be ridiculous.  And likely disappointing.

Instead, we are going to individually jot down, when the moment strikes, one small (or big) “adventure” to pursue in 2019. As I told Hubs, the “adventure” need not be anything huge. Or costly. Or terribly time-consuming. It could be anything from “let’s go for a hike somewhere we haven’t been before”, “let’s try that new restaurant”,”let’s write a blog post together”, or “let’s visit the Sand Dunes in Moab”. Simple, doable, new-to-us experiences.

The only real requirement of this plan, as I told Hubs, is that whatever the chosen “adventure” is, it has to be something that we have not yet done as a couple. Something new.

Then, on perhaps a weekly or at least monthly basis, we will pluck one of our little notes out of the jar, then proceed towards the chosen adventure.

We started living out our “adventure” mantra this past weekend, in fact. As we did nothing of any real interest during the Christmas holidays, and on account of Hubs being furloughed (because of a stupid wall no one really wants besides that big dummy in the White House) and him being stuck at home every day essentially since 12/22, we decided to go on an overnight adventure.

In the spirit of being adventurous, I approved Hubs’ suggestion that he could do all the packing.  That way, he could simply pick me up from work promptly at 2 p.m. on Friday (have I mentioned how much I love my part time hours??) and we could be merrily on our way.

This was indeed an exercise in trust.

Now, this blog is called “Pollyanna’s Path” and I do endeavor to exhibit as well as inspire a positive outlook, so all I’m going to say about the whole packing thing is on a scale of 1-100, Hubs got a solid 80. I’m not entirely certain that in the future I would be quite as willing to trust his ability to remember every essential thing (essential according to me that is) I need to go from looking like a troll doll when I wake up to looking like a reasonably decent member of polite society. But we’ll see.

Okay, so we drove 1 hour away to Idaho Springs, Colorado. The primary point of us going to this specific locale was to enjoy some time soaking here. We did that on Saturday. It was soooo relaxing. And serene. And comforting. And romantic (despite the 50 + people of all ages, genders and nationalities frolicking in the warm, soothing water all around us).

On Friday night, we stayed at this sweet little B&B. It was cozy, the bed was comfortable and breakfast on Saturday morning was quite a treat. An unexpected added bonus was the chit-chat we had with the other two married couples over this breakfast of quiche, hashbrowns, ham, and toast with homemade jam. They were all close in age to Hubs and I. They all had grown children. They were also seemingly hungry for adventure, just like us. We chatted about places in Colorado the couple from California could see before they had to fly home on Sunday. We chatted about having grown ass adult “kids” and how things are different for today’s millennials than back when we were in our 20’s. We talked about the legalization of weed (general consensus: alcohol is far more dangerous in our society than weed ever could be).

During our convo with these other couples, I was told that I look like Jamie Lee Curtis. Hubs was told he bears a striking resemblance to this guy: 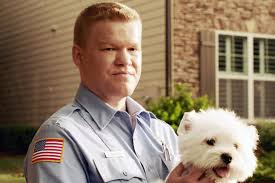 The ironic thing is, Hubs and I recently caught the movie “Vice” (I give it mixed reviews) and started getting into “Black Mirror” (mentioned above) and this particular actor, Jesse Plemmons, was in both of them (and of course in the movie “Game Night”-pictured above-which we really enjoyed). Upon seeing the first episode of “Black Mirror” I told Hubs that this guy looks like he could be his younger brother. His less-good-looking-than him younger brother, of course.

We also enjoyed a nice, “neat”, glass of whiskey at a local bar in Idaho Springs. And we couldn’t leave the place without scarfing down some awesome “Colorado style” pizza at the original Beaujou’s. They have a bottle of honey on each table to dip your crust into to enjoy as a little dessert.

This little getaway was very refreshing and re-energizing for both of us. I’m looking forward to more adventures with Hubs as this year goes on.

What’s in your “jar” for 2019? Or maybe you have a special word, as Hubs and I now do, to guide you through this new year? Please share in the comments!