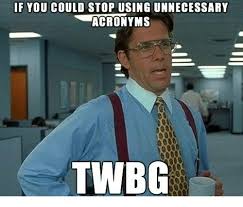 As a person who delights in the English language, I particularly enjoy a good acronym. With the exception of the times when I’ve begun a new job. Co-workers fling acronyms around like our President lies, and until I’m there for a decent chunk of time, I’ve no idea what they mean.

Just for fun, here’s my commentary on my acronyms:

NOAA: Someone I know and love very much works for NOAA (clue: he’s a scientist). He has been known to refer to this acronym as the “National Organization for the Advancement of Acronyms”. Because of course in his field, acronyms abound.

MIAT: This one was created by the great comedic writer, Sarah Silverman. It stands for “Make it a Treat”. I know from personal experience, however, that this one can be overused, especially when the “treats” are the edible kind. I truly need to utilize this one sparsely. Or perhaps I ought to create myself a list of what qualifies under the MIAT acronym that doesn’t involve food.

FEPP: Focused. Engaged. Patient. Positive. This one is my own creation and I pull it out whenever I feel like my brain is all over the place. Like now.

AF: I learned what this one meant shortly after I began using Twitter. It seemed to punctuate so many tweets and I was simply clueless as to what it meant. So I asked other folks in Twitterland what it meant. I eventually got the correct answer: As Fuck. I believe some of my fellow tweeters enjoyed my naivete as the first response (from the Bloggess, no less) was Air Force.

FYI and ETA: these are ones I commonly use, especially via text. FYI is an attention grabber; it emphasizes the importance of the forthcoming information to the textee. ETA is straightforward and requires a specific response, which is especially appreciated if the texter is anxiously awaiting your arrival.

YOLO: While admittedly overused in our society, this remains a favorite of mine. It speaks the truth: that at least as far as we all know, you only live once. So make it an interesting ride by saying yes to adventure in the here and now.

KISS: A very versatile acronym/mantra I use very liberally. I wrote about it here.

FML: This is actually one I despise,  because it’s typically used in the context of someone complaining about a first world problem. It’s negative and hopeless. A total downer.  I am so turned off when people use this one on Facebook.

WIP: What does it mean? This one was used by another blogger in a comment she made on a recent post of mine. I asked her what it meant and I am honestly still awaiting a response. Perhaps she thought it a dumb question, unworthy of an answer. If that’s the case, so be it. I suspect it is one of those special acronyms specific to the blogging world. But I like to think it means “Work in Progress”. Seems appropriate, right?