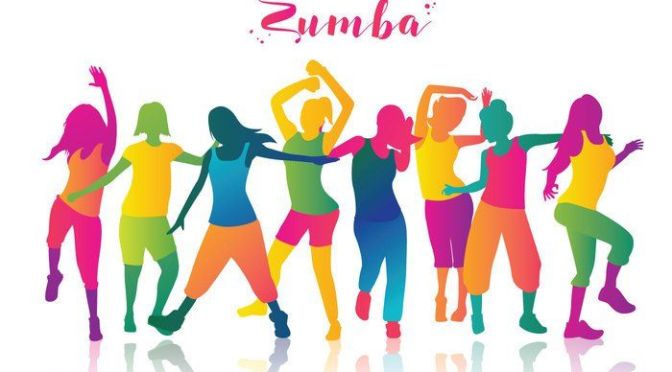 On the off-chance that you’ve never heard of this fitness craze, let me break it down for you.

Zumba is a group dance workout that utilizes world music. It’s high energy and fun. It gets your heart pumping and tends to cause profuse sweating.

I participated in Zumba classes for a few months back in Wisconsin about 8 years ago (mentioned in this post). I absolutely loved it. That’s not to say that I was “good” at it. I’ve been told that I’m a great dancer-but not on the Zumba floor. Because Zumba requires one to mimic the moves of the instructor. At a very rapid pace. My arms and legs don’t work together very gracefully unless I’m doing my own thing. Free-styling, if you will.

During the few weeks between my last job and my current job, I made a pact with myself that I was going to use that time for some self-improvement. I decided that I would start with improving my physical self by getting in some regular exercise.

So I found some videos of Zumba classes on YouTube, pushed my coffee table back a bit, and got my groove on.

Things did not go as I hoped they would.

There didn’t seem to be as many full class videos on You Tube as I thought there’d be. So I was going from dance to dance, different instructors each time, with ads between. Plus Radar was around, getting in my way. In fact, one time while I was “zumba-ing” I jumped on his paw because I didn’t see him there and he yelped in response.

After three attempts at my in home Zumba experiment, I came to the realization that it was just not gonna work.

But I have hope for my future with Zumba. One of my WIPs (Wildly Improbably Goals, a coined termed by writer Martha Beck) is to become a Zumba instructor. With the caveat that the classes I lead are only for those 50 and up. Who are beginners.

I would include simple choreography. Not too much jumping and not too fast-paced. I would have the best soundtrack, but it would not be dominated by world music. Maybe some, here and there. Mostly we would be zumba-ing to a variety of classic rock with a little adult alternative in the mix. The songs we all grew up with and the cool songs of the moment. The ones that have a good beat, making them easy to dance to.

Free-styling will be part of each number we do.

This WIP of mine is obviously not going to happen anytime soon, thanks to Covid-19 restrictions on group gatherings. But that’s just fine by me. I’ve got my plate just full enough at the moment, with running the new food pantry and this blog.

Lucky for me, I’m able to get in plenty of exercise in my work day at this point in time.