So I’ve got a gazillion pictures on my cell phone of food with no place to go. Yes, I am one of those people.

I tend to not post these pics on social media because, well…they are not necessarily well received. People find it silly. Annoying. Pointless.

Truth be told, they are probably right.

But the thing is, I have a blog. And I am a foodie. And I love to cook. Well, most days anyway. When I’m not feeling the cooking mojo, I like to eat out. Try new foods, new places. And on top of it all, a large chunk of my job is running a food bank.

Thankfully, my dear Hubs is also a foodie (though he isn’t necessarily a fan of this particular term-don’t ask me why). He and I quite enjoy partnering up in our cozy (aka small) townhome kitchen and whipping up tasty meals on a pretty regular basis.

What makes it, um..interesting, is that I have a tendency to want to follow recipes to a “T” and he is a little more free-wheeling. He tells me that cooking this way indulges his creative side, which as an IT professional during the daylight hours, is a beneficial exercise. So, for the most part, I go with it. We decide which tasks each of us will do and we carry on with it.

Now for my food pictures.

I would be remiss if I didn’t include this pic of the nachos we made, which were loosely based on Chrissy Tiegen’s recipe in her new “Hungry for More” cookbook.

Pay no mind to my naked foot and focus on this beautiful plate of nachos. I never said that I was particularly skilled at taking pictures of food, people. They were scrumptious! Fresh mushrooms on nachos was a revelation for us. As I recall, the primary difference in our version of this recipe was we added chunks of pre-cooked chicken breasts. It was a meal unto itself.

Below I present you with Food pic #2. It’s a chicken breast sauteed in olive oil, slathered with homemade pesto sauce and mozzarella cheese with brown rice and succulent mushrooms on the side. Super simple to make, healthy, and delicious! This is actually on the menu for tonight. 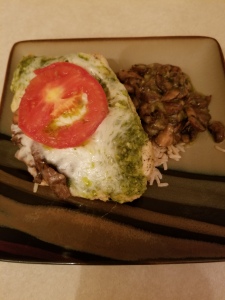 Then there’s this gorgeous plate of authentic hummus I enjoyed with warm, fresh pita bread at a middle eastern restaurant in Kansas City when we visited friends there in February.

I recently made a pineapple upside down cake and brought it to work. I couldn’t resist snapping this pic below of the jar of maraschino cherries used in this recipe. “Real Cherries * May Contain Pits”. Quite the metaphor for life, don’t ya think?

Come on, fellow foodies-share your food pics in the comments!